Sh! Womenstore is a store that I have admired ever since I took my first leap into the world of sex toys. Sh! was formed in 1992 and their staff is made up completely of women. The products they sell are designed with women’s pleasure in mind and is a pleasant alternative to some companies who focus on graphic, in your face marketing tactics.

When I decided to contact companies I really wanted to work with, Sh! was at the top of the list and I was thrilled when I was able to review the Sh! Bliss G-Vibe for them. 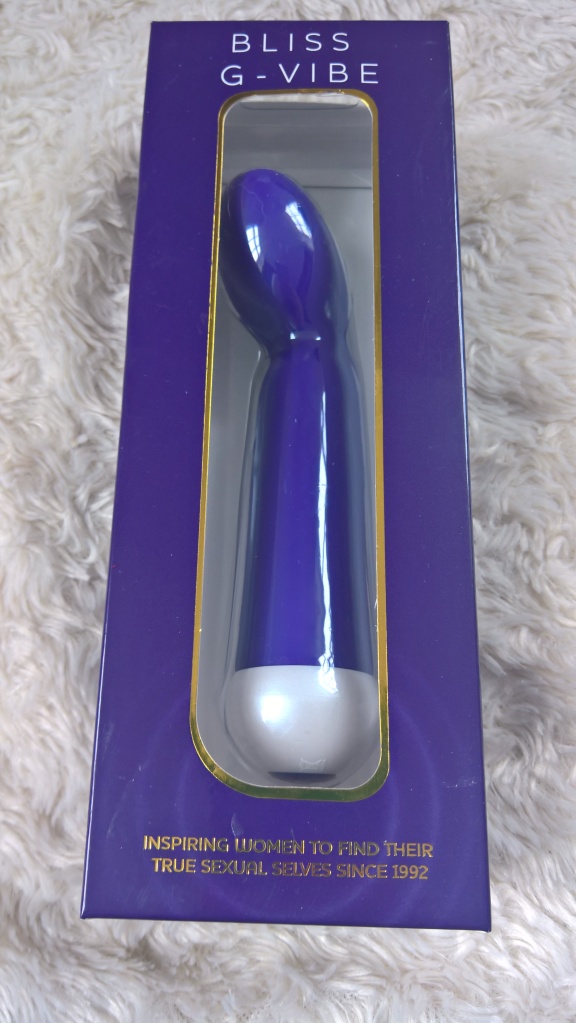 The first thing that struck me when the Bliss G-Vibe arrived was the shape. The name should have been a give away but the only pictures I had seen previously didn’t show off the curve at the head of the toy so I was excited of the prospect of it hitting my g-spot perfectly.

The vibe is made from a lovely purple shade of phthalate free silicone and is incredibly soft. It has almost a velvety feel to it. It’s quite petite at just under 6 inches in length, 5 of which are insertable.

The Bliss G-Vibe is battery-powered and takes a single AA battery in the base of the toy. It is extremely easy to get into the battery  compartment. It seems to a rare quality with a lot of the toys I have tried if I am honest and can be bit annoying. The cap screws on quite tight and it has a small rubber seal with means that it should remain waterproof.

The controls couldn’t be any more straightforward, there is a single button on the white cap covering the battery compartment. The purple button is covered with the same silicone as the vibe itself. The button is easy to press but it isn’t possible to change the setting without meaning to.

I’ve used a lot of vibes that profess to be whisper quite but the Bliss G-Vibe is the first one that actually is! When Mr Nerd first tried it out I thought he was daft enough to fail to figure out how to switch it on however it was just so quiet I couldn’t hear it! Unless you put it on a hard surface you cannot hear it from another room.

The G-Vibe has plenty of options to choose from. Pressing the control on the base allows you to cycle through 3 intensities and 4 further patterns. Pressing the control button again switches the vibe off. The down side of this is your cannot cycle backwards so if you are on a pattern and you want to go back onto one of the normal single speeds/intensities then you have to switch it off to go back to the beginning. However the G-Vibe reacts quickly and it is easy to press the button so you don’t have to interrupt play time.

I am starting to realise that I should never underestimate any toy. This isn’t a vibe for power queens however whatever it lacks in power, for me it makes up for with its design. 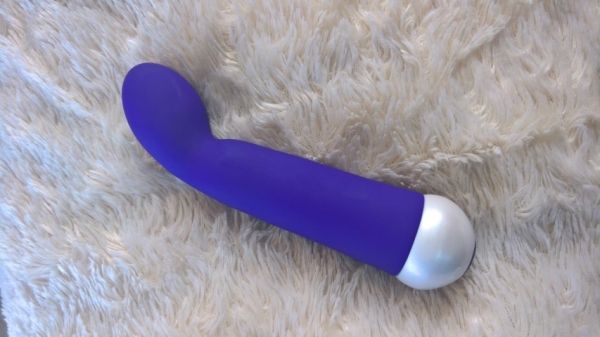 As I mentioned the silicone is super soft but the vibe also has a bit of flex at its neck. This is great as it allows you to put more pressure against the vibe for perfect G-spot accuracy. It is particularly great for clitoral stimulation. I really clitoral toy that s I can get both vibration and stimulation from friction against my skin. The flex meant that I could press slight harder against my clitoris and this is how I enjoyed it most.

It is very unusual that I can orgasm from either G-spot or clitoral stimulation alone but the Bliss G-Vibe got me there with ease. I really enjoyed using the G-Vibe and I can honestly say I use it very often including in the shower so I can confirm it is 100% waterproof.

For its low price I think it is an absolute steal! The Bliss G-Vibe is not to be underestimated. Its a brilliant design with its super soft silicon & flexible curved shaft so in my opinion has a place in every toy box.

Note from the Nerd: The Bliss G-Vibe was received free of charge in return for an honest review. This has in no way influenced my review and my opinions remain my own.