Shhhh! Can you keep a secret? I have really liked the look of So Divine toys for a while so my delight when I was offered a couple of toys to test in return for an honest review. Thanks Sophie! After I spent a good 30 minutes perving over the contents of my parcel I couldn’t wait to get started with one.

I pounced on the product that first caught my eye first, the Sweetest Taboo Magic Wand. I haven’t gotten along with the mains powered wands in the past but I do really like silicone rechargeable wands so I really hoped that I would like this one too. 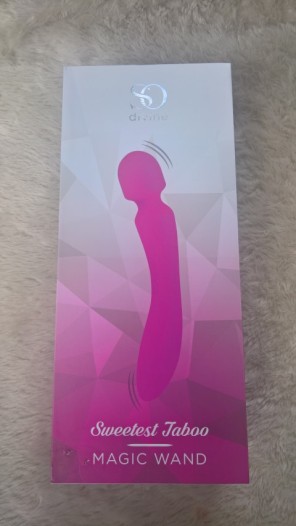 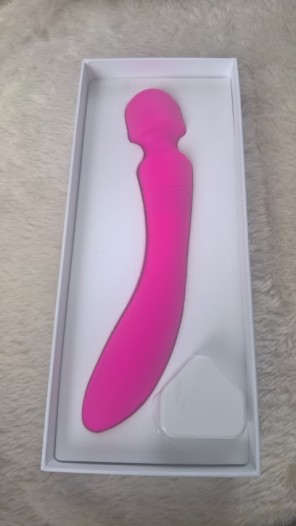 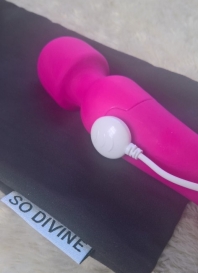 The Sweetest Taboo is rechargeable and comes with a USB charging cable and a USB compatible plug. Given all my tech I have loads of USB plugs already but it never a bad thing to have spares. The charger attached to the wand at the back with magnetic charging pins. The magnet on these types of chargers can sometimes be a little weak and cut off but no problems with that here. It took a little over an hour to charge up and you get about 2 hours of play time from that.

The packaging of the Sweetest Taboo is awesome, it is a fabulous mix of modern, feminine and simple. It is 100% my taste and would without doubt be one which I would gravitate to in a store. The front of the box is reserved for the star of the show with a big picture of the wand as well as the branding. The box includes some key facts too including:

It’s good to have this on the box because as a consumer I want to have the information to allow me to make an informed decision, especially when doing something as important as buying a sex toy! Once you get past the box you get your first proper glimpse of the Sweetest Taboo in all its hot pink glory. 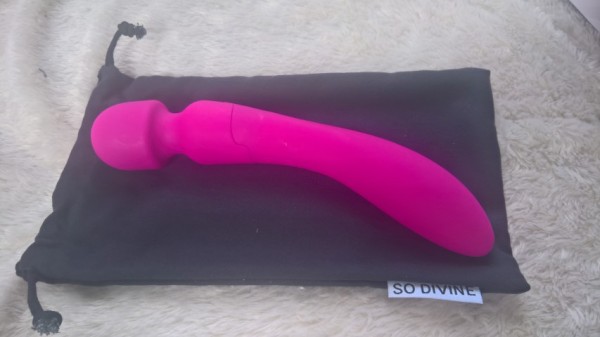 Magic wand is its curved shape. Every single other wand I have used in the past has been poker straight and I thought this was a stroke of genius. The delicate curve made it so much more comfortable to hold for extended periods. The wand head is quite petite and I was concerned as to whether it would give me the broad stimulation that I craved.  So Divine has clearly used a high-grade silicone, it has the silky softness of a ripe peach which keeps drag to absolute minimum!

The wand has dual motors, one situated at each end of the wand which are controlled independently. There are 3 buttons on the wand, the middle switches the wand on and then you press the triangle pointing to the end which you wish to use. Pressing either of these buttons repeatedly allows you to change through the different function. Pressing & holding the middle button switches the wand off.

Something worth noting is that both ends of the wand do not vibrate at the same time. However there is no issue with this as it is so easy to transfer between the ends and it saves you from getting a tingly hand when holding it.

So did the Sweetest Taboo work its magic on me? Absolutely!! I needn’t have worried about the small wand head. With a slick of my favourite water based lube it gave me all the sensations I wanted. I got the sweet stimulation from my clitoris and with small sweeping movements I enjoyed the vibrations against my labia and the entrance to my vagina. It wasn’t a fast and furious orgasm but a long build up before it finally dropped me over the edge. Yum! 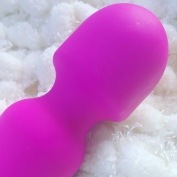 When finished you can clean up with some warm water and sex toy cleaner. There are some little indents around the control buttons so be careful to ensure that it is properly clean. Leave it to dry and store it in the high quality storage case that comes with it & you are ready for next time.

This is a lovely little wand, So Divine have done a brilliant job with it & it feels like all the like things have been thought of. The packaging and design of the wand are spot on. The curved shape and dual motors give it an edge on other similar rechargeable silicone wands.

You can buy the So Divine Sweetest Taboo Magic Wand from www.so-divine.com

Note from the Nerd: The Sweetest Taboo was received free of charge in return for an honest review. This has in no way influenced my review and my opinions remain my own.